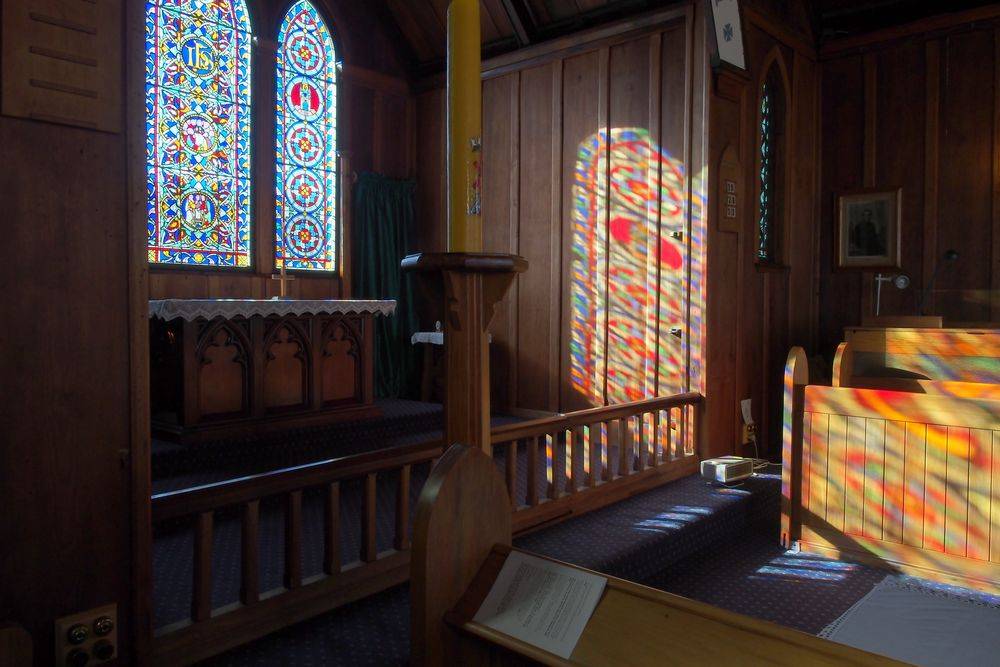 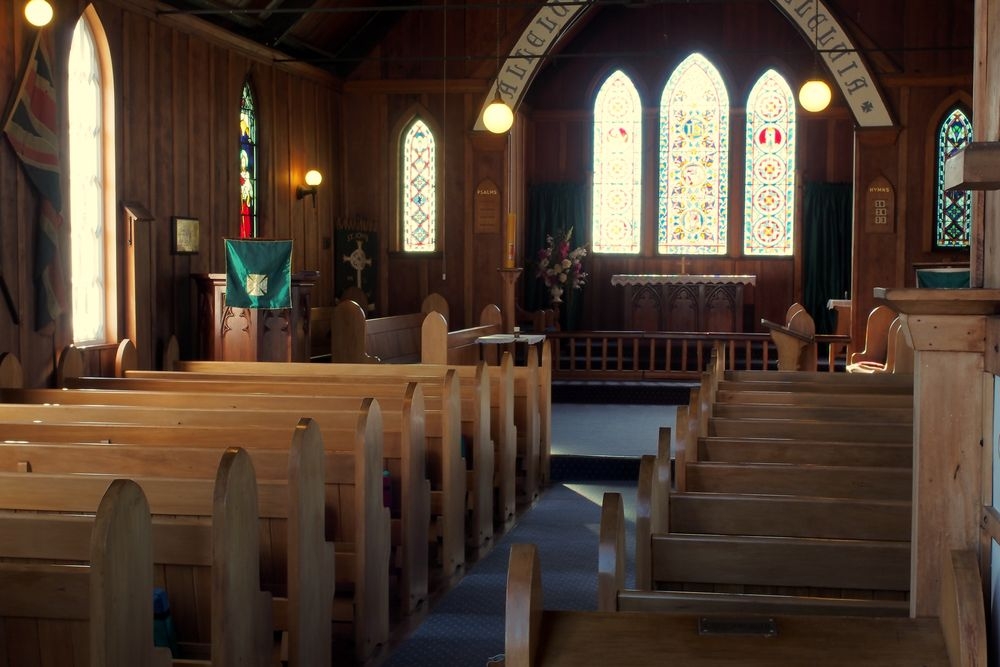 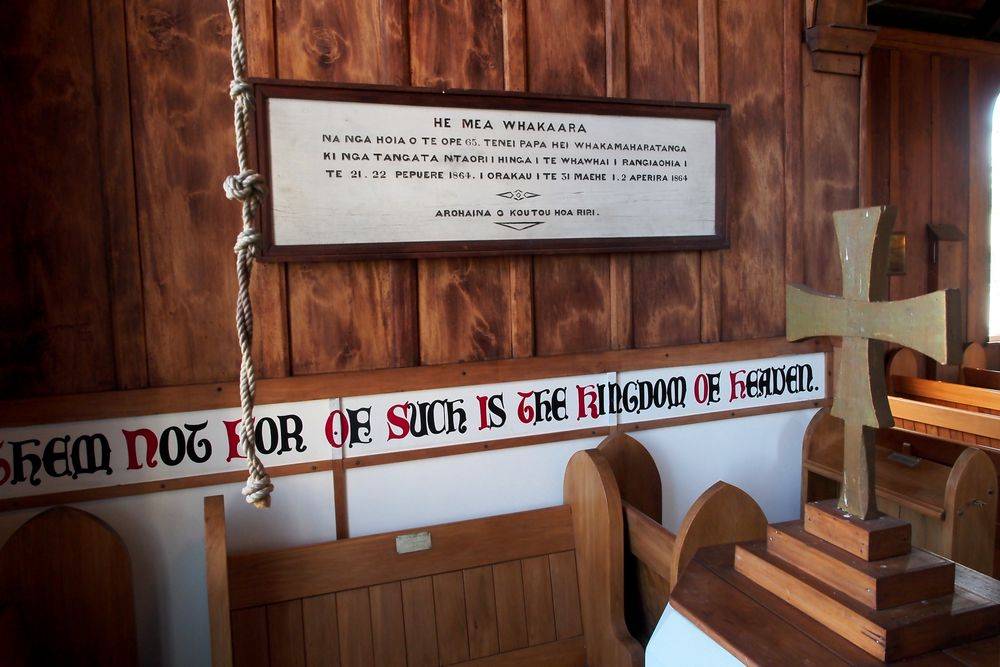 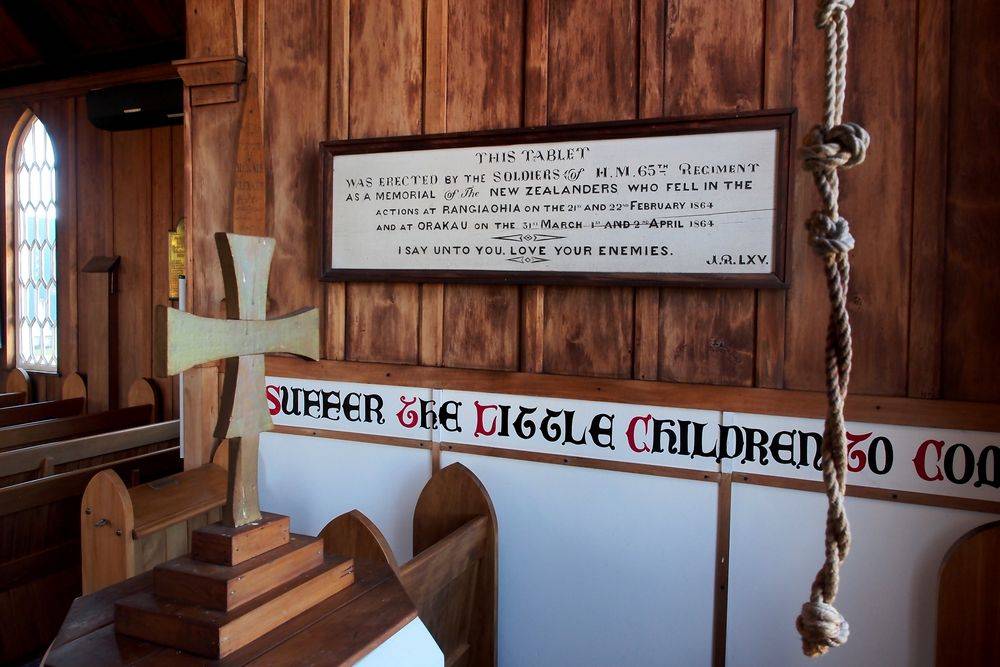 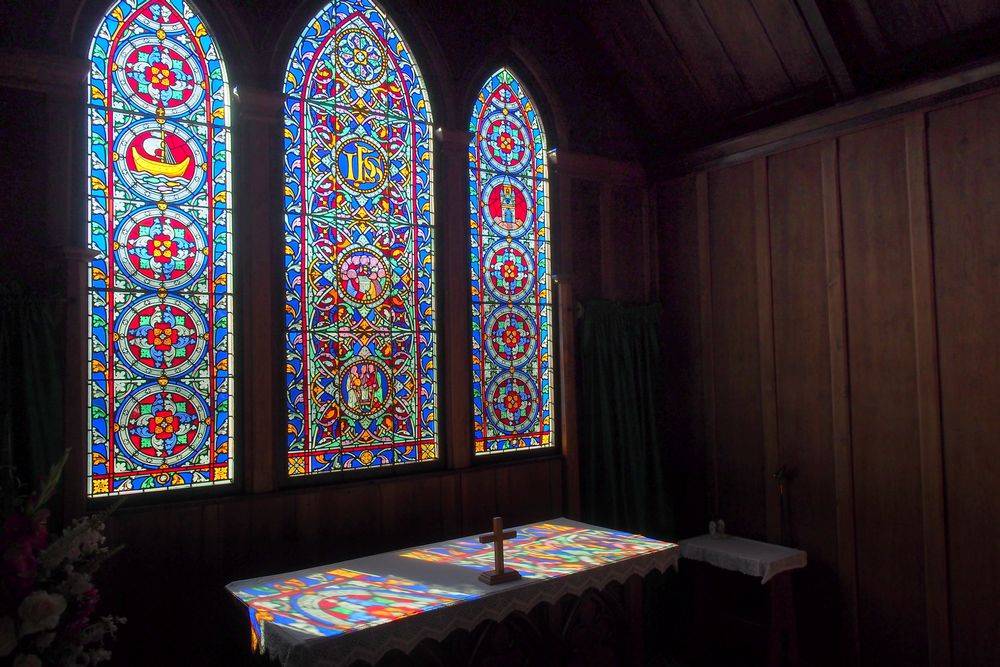 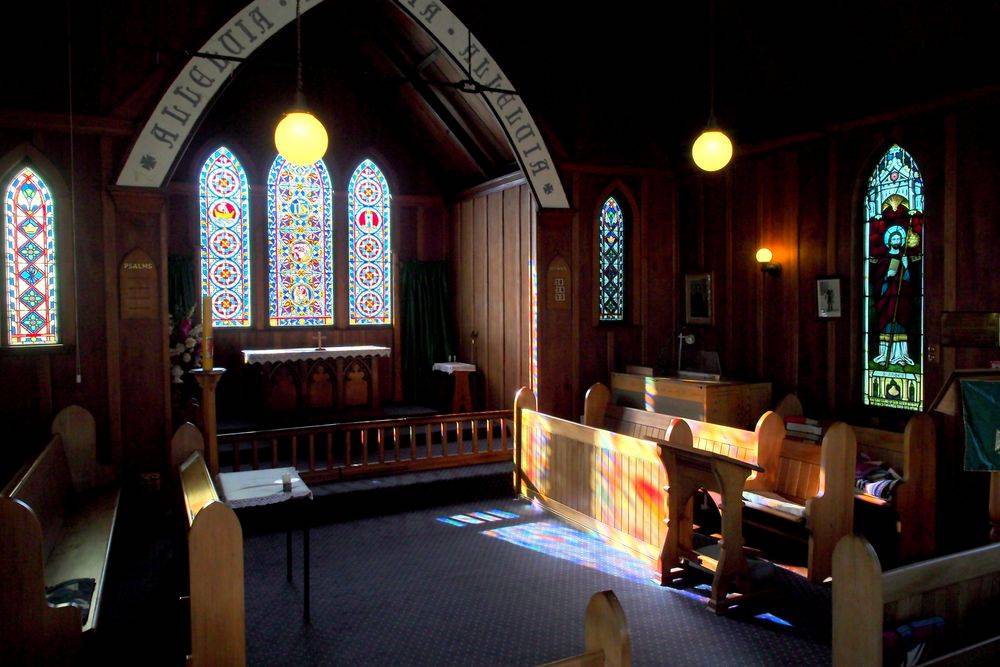 People have  been visiting this remarkable sacred space for many decades. The church is the oldest building left standing in Waikato and was opened on Easter day 1854 by the largely Maori community ,working with the Reverend John and Maria Morgan, who had arrived in January 1841. In 1856, a similar church was built in a similar way at Rangioawhia. All the timber is pit sawn and the beautiful stained glass windows were salvaged from an earlier church and were carried by Maori supporters over the Wairere track from Tauranga, an ancient trail over mountain, bush and rivers, still in use today. The sanctuary window comprises three lights, the left showing St Peter’s ship, the centre showing the Christian acronym IHS, the last supper at Emmaus, and in the right light, a church. It was from here that the gospel spread and much agricultural and horticultural activity blossomed, later spreading and developing into the vast gardens of Rangiaowhia.

Early in 1864, during the Waikato Land Wars, St John’s became a garrison church for the men of General Cameron’s Army, having previously been the centre of a Maori mission. To a Maori Chieftainess, Irihapeti Te Paea Potatau, (the daughter of the first Maori King who had been born at Te Awamutu), who placed her mana on the church, do we owe its preservation. Many other European buildings were burnt at that time as the followers of the paramount chief Rewi Maniapoto stood against the incoming colonial forces. A number of wooden tablets, memorials to those on both sides who died during the fighting in this district were erected around the interior walls – only those in the baptistry have survived.

The framing and weatherboards are heart Matai, cut from the Rangiaowhai and Kihikihi districts. The weatherboards are 305 millimeters, rusticated construction with fillets at the corners. The lining is heart of rimu, set vertically. All timber is pit sawn and the building directed by two European carpenters, Edwards and Chitham assisted by Maori builders.

Being the daughter of King Potatau Te Wherowhero te Tuatahi and the sister of King Tawahiao, it is a great honour for us to recognise the Princess for her role regarding the church in the 1860s, at Te Awamutu.

The Princess placed her mana on the church because it was part of the Maori mission from the 1850's, and she didn't want it disturbed when the war came to Waikato Maniapoto. For this reason the church remains the oldest building still standing in the Waikato Maniapoto area to this day. The church owes its enduring presence to her.

A number of wooden tablets, memorials to those who died during the fighting in this district, were erected around the interior walls. Only those in the Baptistery have survived.

A tribute from a British Regiment of Foot is also found in the Baptistery. This regiment, the 65th, The Royal Tigers’ attired in New Zealand in 1847 and departed in 1865, wrote the tribute in both English and Maori. They had come to respect their Maori opponents, and were respected in return.

Other memorials are to be seen in the main body of the building, including memorials to honour the men of the district who gave their lives during the two World Wars.

Attention is also drawn to the footprints and fingerprints on the ceiling near the main door. Many are the legends told of their origin.

The British casualties who died at the battles of Rangiaowhai, Hairini and Orakau are interred to the north of the church. In 1888 the Government erected a memorial to the rank and file, who were interred close by. Two Officer’s graves are to be seen directly outside the Sanctuary. Also nearby is the memorial to four of John Morgan’s children. This is reminder of the sacrifices that he and his wife made in bringing Christianity to the Maori People.

Directly in front of New St John’s there stands another memorial to some of the Maori soldiers who died during hostilities in the Land Wars. These were interred here at the request of Bishop Selwyn, first Anglican Bishop of New. Zealand.

A tour of the Church yard will also reveal the names of many European pioneers of this district, whose descendants still reside here and help to preserve our Historical heritage.